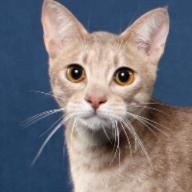 65 male, software geek. Married 38 years, three grown daughters and two grandkids. Just added a new family member at Christmas, 2011, (thanks to two of our daughters). Saphira is a lavender Ocicat, here's her web page: http://www.catster.com/cats/1255985 Upate: Saphira has become such a wonderful companion, best behaved cat we have ever known, that when another cute Oci became available from the same breeder, we adopted her to give Saphira a feline friend. Viola is 18 months old and acts like a kitten. Lifelong conservative, always vote and never vote for Dimocrats. My main ways of wasting time and money are astronomy, photography, and ham radio.