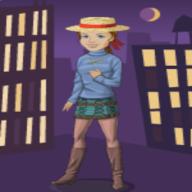 I'm in my mid-forties. I'm married with 1 teenager and 1 dog. I collect elephants, but all are on one book shelf. In a compromise with my husband I got rid of about 1/3 of my books, so now I only have about 500. I do data entry at work, I come home and hop on the computer. I bought a Webkins for my young niece so we could play online with each other. She doesn't play with it much anymore, but I still do.